Want to spice up your relationship for Valentine’s Day? Or maybe even start a new one off on the right foot? Go on an exercise date.

Exercise has a lot of health benefits and can also result in better connection and attraction among people. Those who exercise report higher satisfaction in their relationships. And this is even stronger for people who exercise with their partners.

It’s all about the hormones

When you exercise, your body releases hormones such as endocannabinoids and endorphins. Endocannabinoids work on the reward areas of the brain — the same system affected by marijuana — and improve mood. Endorphins are your body’s natural opioids: the feel-good hormones that block out pain.

As a result of these hormones, people feel happier after exercise, even after a single session. The effect of exercise is long-lasting and is associated with more positive social engagement, even into the next day. This may be because happier people smile more and smiling people are viewed as more attractive.

Adrenaline is also released as a result of exercise. It raises your heart rate, speeds up your breathing and increases your blood pressure. These are all similar responses to being sexually aroused.

A classic study that purposely created situations to increase adrenaline release and anxiety found a relationship between anxiety and sexual arousal. This is termed misattribution of arousal, in which arousal of any sort, such as from anxiety or exercise, can be misinterpreted as sexual arousal by the body.

Indeed, following a 15-minute exercise session, adults reported greater attraction to pictures of the opposite sex compared to those who didn’t exercise, with the attraction increasing based on perceived indicators of exercise intensity.

Exercise also improves your confidence and self-image, which can make you more attractive to others. Our confidence, or self-efficacy (belief in our own abilities), tends to be tied to how much exercise we do. When it comes to self-esteem and body image (our satisfaction with your own body), these too are greater in people who exercise, and the more frequently they exercise, the greater the self-esteem.

Couples who exercise together, stay together 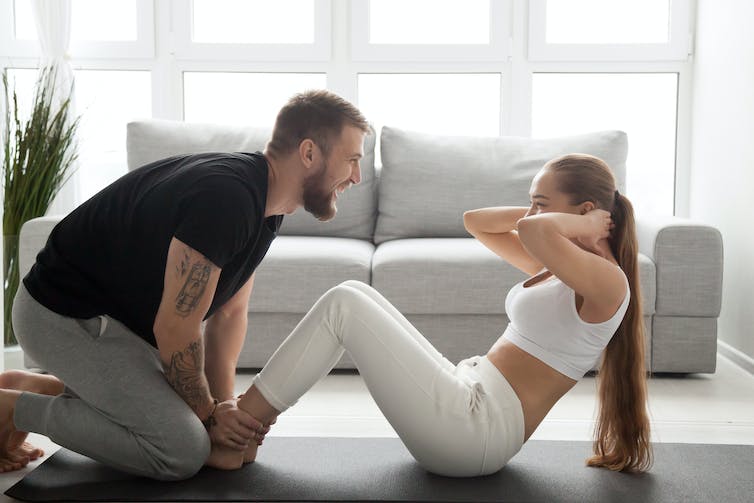 Research suggests that couples who exercise together, stay together.     (Shutterstock)

The benefits may also be greater when you exercise with your partner. Some of this may be the result of spending time together and sharing an enjoyable experience. However, couples who completed novel and arousing (or exciting) activities together reported increased relationship quality compared to completion of a more mundane task, suggesting it’s not just the time together that matters.

This is consistent with findings that exercising with another person is more fun compared to exercising alone.

But you don’t need to know the person for exercise to have this effect. Exercising with a stranger can also result in attraction to one another.

This was tested in an experiment of cross-sex partners randomly assigned to perform a physical task either at a low or high intensity. After completion of the task, participants answered questions regarding their attractiveness to their study partner. Those participants who performed the task at the higher intensity reported greater attraction for their study partners.

The attraction can be further enhanced when exercising in activities that require similar movements such as dancing or walking in synchronicity. In lab experiments, people who mimicked the movements of their partner felt stronger emotional connection and greater bonding to one another.

A later study found that the addition of physical exertion amplified these feelings. Compared to a group of people walking randomly, the group marching synchronously felt more connection and co-operation with one another. In another group that was marching at a faster pace, these feelings increased even more.

Exercise is also a form of play. There is no better example of this than watching kids play. Play for them consists of running around, climbing and jumping, very similar activities to most types of exercise. In many instances, such as sports, play is directly inherent in the activity. This social play provides its own reward by releasing endorphins.

Exercising with a partner adds accountability

The effects of exercising with a partner can also be better for you as well. In addition to being more fun, workouts with others tend to last longer than workouts alone, which can give you an added health boost. Exercising with a partner, friends or a team adds accountability to your routine, as indicated in a study of married couples. Those couples who joined a gym together reported more workouts at the gym and fewer dropouts over one year compared to married individuals joining on their own.

In a way, the effects of exercising together are almost self-fulfilling. It provides accountability, strengthens your relationship and provides more fun, making it more likely that you’ll keep exercising and continue the cycle.

This article is republished from The Conversation under a Creative Commons licence. Read the original article.

A portion of the sale from every Run Little Monkey item will go to support Girls Inc.’s Sporting Chance program.